Me: Rylie do you want cereal for breakfast?

Me: Do you think Cesalie would like cereal too?

Me: Do you want milk in your cereal?

Rylie: No, thank you.

So I get two little bowls of dry Apple Jacks, and hand them to Rylie. She runs over to Cesalie and gives her, her bowl. I put on the T.V. for them and I go into the other room to start straightening up.

So, after I leave and go into the next room, Rylie decides she now wants milk in her cereal, but here's the thing about Rylie-She wouldn't just come to me and ask for some milk, she has to just go get it herself.

Anyway, she goes into the fridge and gets the milk. Oh and by the way she decided Cesalie wanted milk in her cereal too. So she takes their bowls, puts them on to the counter, pours milk into each bowl and them grabs a baby size spoon for each of them. Because, now that they have milk in their cereal, they need a spoon, and it doesn't matter that one Apple Jack is bigger then the spoon.

Isn't it great how she can help herself? Isn't wonderful that she doesn't need to bother me about simple things like milk? The only problem is, that since she doesn't quite know how to read yet, she pours Egg Beaters into their cereal. But, hey the little carton looked just like milk to her. Thankfully I caught her before she fed herself and Cesalie 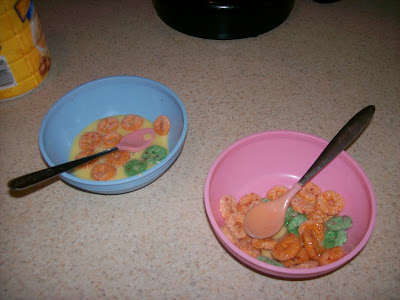 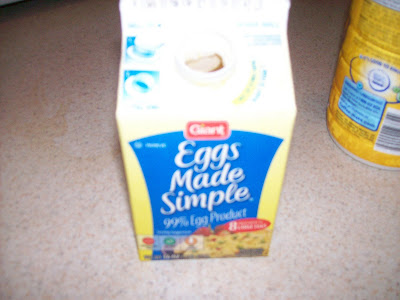 Labels: Rylie cracking me up

oh that is too funny! I got a chuckle reading that it was egg beaters instead of milk! Good thing you did catch it though! and how great that she is becoming so independent like that!

Too funny! At least it's pasturized. She may have never eaten cereal again, though!

Came by to thank you so very much for praying for my Presley, truly.

I am glad I came by, I got a good laugh from this post! Too cute!!

Oh man - I am laughing so hard! What a fiesty and independent little girl you have there! Rylie - you make me smile :) WTG on those great self help skills - Rylie is going to go far!!!

I'm Alisha from Wowzio, and I'm excited to tell you about our new widget platform that helps bloggers increase readership by providing engaging widgets containing your blog's rich content. You can check out widgets customized for your blog here:

Wowzio Widgets for your Blog

I wanted to reach out to you to ask for your feedback on these widgets (feel free to install them on your blog, if you feel they are a good fit). I'm sorry for leaving this message via a comment, it's not at all our intent to spam you ( which is why i'm leaving this comment on an older post and you can always remove this comment ). Again, we would love to hear your feedback.