I Don't Even Know What to Title This.

Rylie and Cesalie are driving me CRAZY!!!!! They keep waking up in the middle of the night. I feel like I'm up all night trying to get them back to sleep! Actually Vince and me take turns waking up and getting them back to sleep. I have never had this problem with Rylie. She slept through the night since the day we brought her home from the hospital as a newborn. Now that she is five, she decides she can't sleep through the night anymore???? GRRRR!!! And Cesalie,well she has been trouble since the day we brought her home.LOL! She's just not a good sleeper and apparently she's rubbing off on Rylie. I think were gonna have to separate them. Last night they were up between 3:00 AND 5:00. We could hear them on the monitor laughing away. When I peeked in the room this morning around 9:00 they were both sound asleep. They are never still sleeping at 9 in the morning, but apparently all the fun they were having in the middle of the night really wore them out. Rylie was asleep on the floor with a Pull-Up on her head. And here's a picture, just so you know, I can't make these thing up. I was hysterical laughing when I saw this! She didn't even wake up when I took the picture. Also, she had a pink nightgown on last night when she went to bed, but for some reason during the night she felt the need to change into this T-shirt. 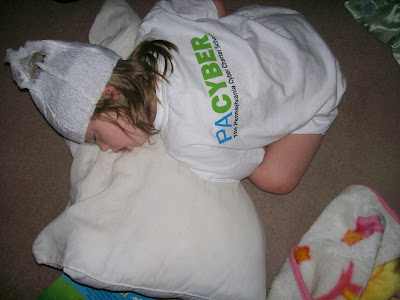 Labels: Rylie cracking me up

oh that picture is priceless!!

Hilarious! I think I'll pass on the new hat craze, though.

That just cracks me up! Once my girls and I put depends on our heads and drove thru town. Just a day of fun.

AAAhhh! That's actually a sweet sister story. That picture is a riot!!

LOL! How did I miss this picture before? It took me a moment to realize that was a pull up on her head!